Workshop on "Mechanics and growth of tissues: from development to cancer"

In this post Dr Alexander Fletcher, Research Fellow in Computational Science at the WCMB, discusses the workshop "Mechanics and growth of tissues: from development to cancer", which took place at the Institut Curie in Paris on 13-16 January 2014, and describes the content of his poster contribution.


Over the last few years, scientists have increasingly sought a quantitative understanding of the mechanisms underlying the dynamic behaviour of tissues during growth and disease. The aim is to elucidate how cells collectively self-organise into tissues and maintain configurations through different celllular signalling systems. To accelerate this endeavour, the workshop brought together biologists, physicists and mathematicians to discuss recent developments in this field: from experimental advances such as optogenetics; through improvements in live-imaging and microscopy; to new integrative approaches to studying the interplay between cell mechanics and signalling, combining in vivo observations with computational modelling. 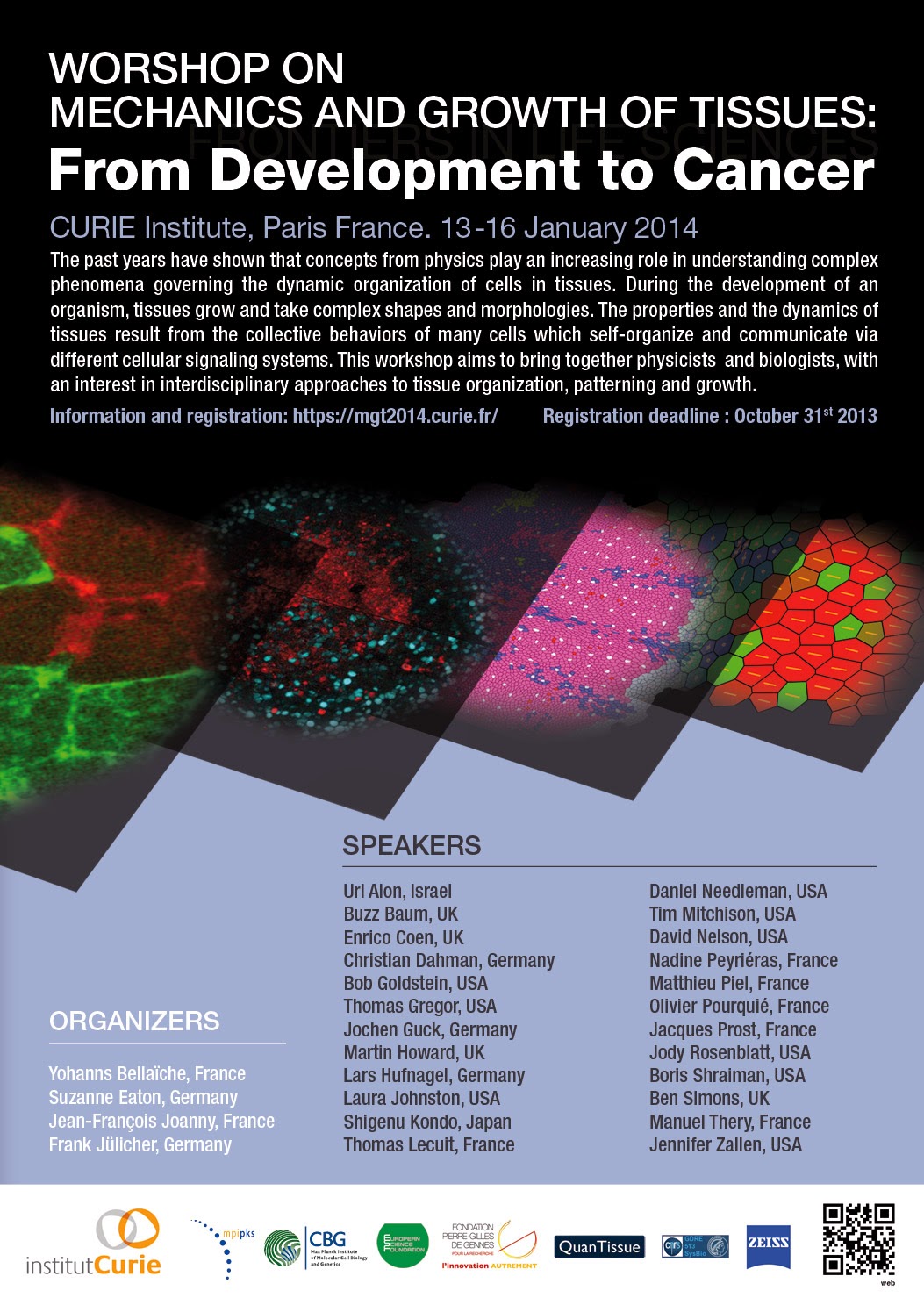 Some highlights from the workshop


The workshop included several excellent talks, of which I would like to highlight three in particular: those of Uri Alon, Buzz Baum and Boris Shraiman. These talks ranged from evolutionary trade-offs, to cell shape changes during mitosis, to the role of mechanics in tissue growth.

The workshop opened with an excellent talk by Uri Alon (Weizmann Institute of Science) on "Evolutionary tradeoffs and the geometry of phenotype space". This described his group's work that used the Pareto front concept from multi-objective optimization to establish best-trade-off phenotypes as weighted averages of phenotypes specialized for single tasks (termed 'archetypes'). For two tasks for instance, phenotypes fall on the line connecting the two archetypes. An intriguing consequence of this work is a significant dimensional reduction in the trait space explored by phenotypes. One impressive example of this was provided in the form of E. coli gene expression data, which (with appropriate transformation) were found to lie on a line between two points corresponding to 'growth' and 'survival' phenotypes, even though the measured phenotype space was 2,000-dimensional. This motivates the interesting suggestion that the vertices of polyhedra fit to such datasets might provide information or intuition on the tasks that may be present.

In a talk titled "The importance of being well-rounded", Buzz Baum (UCL) discussed work done by his and Matthieu Piel's labs to investigate the function of mitotic cell rounding. They found that mitotic rounding generates a space in which to form and correctly position the spindle, and that cancer cells seem to have a greater requirement for rounding (possibly due to ploidy). It was also established through RNAi and optical stretching that cells change shape very early during mitosis, and that this is driven by relocalisation of the protein ECT2. This work highlighted the exciting advances that are being made in elucidating the mechanisms coupling mitotic cell shape changes to cell cycle progression and provided much food for thought for future computational models of proliferation within epithelial tissues.

Boris Shraiman (KITP) gave a talk titled "Mechanics of epithelial morphogenesis: from theory to experiment and back", which began with an excellent discussion of how theorists can contribute to our understanding of developmental processes. This included a reference to Alan Turing's seminal 1952 paper on morphogenesis, which made it onto the Nature-sanctioned list of milestones in development. After describing his earlier work exploring how mechanical feedback could regulate tissue growth, Shraiman went on to describe experimental validation for this work, including a quantitative map of strain in the case of the Drosophila wing imaginal disc (a model system in development). He also discussed some recent work on inferring stresses from static images based on a 'mechanical inverse' method, which overcomes issues associated with more invasive experimental protocols such as laser ablation of cell junctions. Similar approaches are likely to become more widely used, as an increasing number of integrative studies try to place computational models on a quantitative footing through validation against experimental measurements of forces within tissues.


The title of the poster that I presented at the workshop is "Implementing vertex models of epithelial sheets in a consistent computational framework". This poster is based on our recent publication of the same title [1].

Vertex models consider cells as individual objects and assume that epithelial mechanics are dominated by forces acting within the plane of cellular junctions (adherens junctions). Cells are considered as two-dimensional polygons representing cellular interfaces, with vertices forming where three or more polygons meet (figure a below). Every vertex moves in response to forces due to growth, interfacial tension and hydrostatic pressure within each cell (figure b below). The precise forces considered and the method of implementation vary across models. In order to accurately describe epithelial dynamics, cells must be allowed to form and break bonds, and be prevented from (self) intersecting. This is implemented through simple operations, such as cell intercalation (also called neighbour exchange or T1 transition; figure c below). The evolution of the system is thus a combination of relaxation to mechanical equilibrium and changes in tissue connectivity according to prescribed cell rearrangement processes.


Vertex models are increasingly used to study cellular processes within epithelia, including cell motility, cell–cell adhesion, mitosis, delamination and apoptosis [3]. However, a major barrier to the wider use of such models as a computational tool by the scientific community is the lack of standards or benchmarks. It is still the case that previously developed models and methods are often not re-used effectively, since they are typically not available as rigorously tested, open source simulation software. It is therefore difficult to guarantee the reproducibility of computational results.

Our work has sought to address this problem by providing an open source C++ implementation of vertex models of epithelial tissues within Chaste [4]. Chaste comprises fully tested, industrial-grade software that has been developed using an agile approach. This computational framework allows one to easily change assumptions regarding force generation and cell rearrangement processes within these models. In our paper we illustrate the versatility and generality of this framework using a number of biological examples, with a focus on providing full details of all technical aspects of our model implementations. Of course, this work is ultimately driven by some concrete scientific problems arising in the study of epithelial dynamics, which I hope to discuss in more detail in a future blog post.

In the spirit of open science, I have uploaded my workshop poster to Figshare. You can find it here. Personally, I will try to do this with all my research posters in future and hope that this becomes the norm for conferences, if not using Figshare then with some other form of online repository. It would seem that everyone benefits: the presenter benefits from their research output being accessible as well as citable (all Figshare content has its own DOI), and is able to link to and update other relevant material; other conference attendees benefit, who may not have time to make it to all the posters they wish to view or may overlook a poster, for example due to a misleading title; and the wider scientific community also benefits, who did not or could not attend the conference but may be interested in reading the poster.

Wolfson Centre for Mathematical Biology (WCMB) at the University of Oxford, UK