Silver at SET for Britain

In this post Dr. Christian Yates , a Junior Research Fellow working at the WCMB, gives us a description of his poster on locust migration which scoped the Silver Award in the Mathematics section of SET for Britain, a national poster competition held in the Houses of Parliament.

On the 17th of March I headed down to London, more specifically to the Houses of Parliament, to present a poster of my work [1] on modelling locust migration to leading scientists and MPs as part of the national “SET for Britain” poster competition.

The aim of for SET for Britain is to encourage, support and promote Britain's early-career research scientists, engineers, technologists and mathematicians, who represent Britain's future scientific and technological leaders. The event was well attended by both politicians and researchers. Presenters are entered into the engineering, biological and biomedical sciences, physical sciences (chemistry), physical sciences (physics), or mathematics session, depending on the researcher’s specialism.

This year, for the first time, SET for Britain was open to mathematicians, so I was delighted to have been selected  to present my poster in the inaugural competition. It’s important, as mathematical biologists, that we can explain and justify the work we do. I think SET for Britain presents a great opportunity do that by communicating my work to a wider audience, including the people who make high-level decisions about research funding.

On the day approximately 210 early-career researchers (including 30 in the Mathematics section) turned up to present their work.  Over a two hour session in the Churchill room (click here to see an interactive panorama of the room taken at a previous event) we were visited by politicians, academics, education specialists and, of course, the all important judges (Professor John McWhirter (Cardiff University), Dr Vincent Knight, (Cardiff University), Professor Kevin McConway (The Open University), Professor Tim Pedley (Universiy of Cambridge) and Professor Nick Woodhouse (University of Oxford)).

After spending two hours convincing the judges that increasing the noisiness of their motion can help to keep locust swarms aligned for longer, I was presented with the Silver award in the Mathematics competition.


Below is a copy of the poster and the abstract that I submitted for the pre-selection process, which summarises the work I presented in my poster and hopefully captures the essence of the project without being too mathematical. 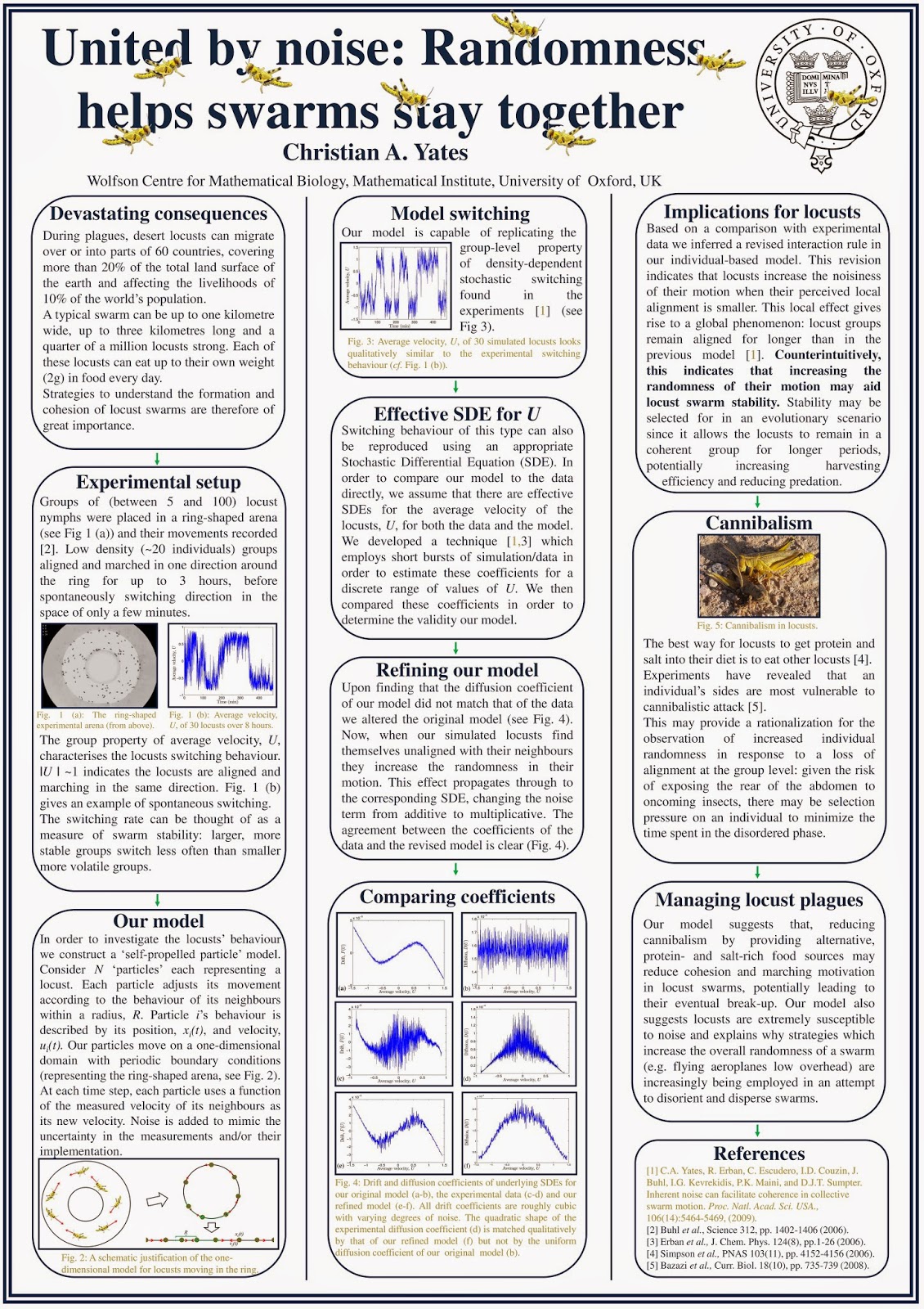 During plagues, desert locusts may migrate over or into parts of 60 countries, covering more than 20% of the total land surface of the world. A typical swarm can be one kilometre wide and up to three kilometres long. With typical densities of 80,000 locusts per square kilometre swarms can comprise up to a quarter of a million locusts each eating their own weight (2g) in food every day. Given such voracious appetites and such large numbers it is easy to understand the devastating effect locust swarms can have on the lands they ravage and consequently on the livelihoods of the 10% of the world's population who encounter them. Strategies to understand the formation and cohesion of locust swarms are therefore of great importance. We present a collaborative interdisciplinary approach in which mathematical modelling is combined with experimental investigations. Our work leads to novel and counter-intuitive strategies for controlling locust swarming.

To investigate swarming dynamics, locusts were placed in a ring-shaped arena it was observed that they marched together in the same direction (clockwise or anticlockwise) around the arena before spontaneously and collectively switching the direction of their marching. The switching rate can be though of as a measure of the stability of the locust group, with larger, more stable groups switching less often and smaller more volatile groups switching more frequently.

By carefully analysing the experimental data on the switching behaviour of locusts we are able to build accurate individual-based mathematical models of locust movement. In these “self-propelled particle models” each locust is represented as an individual with a position and a velocity. These properties are updated at discrete time-steps according to the behaviour of neighbouring locusts. Noise is added to the model to mimic the natural randomness of such systems.

Such models have great predictive power and are able to forecast the nature of the density dependent switching phenomenon seen in the experiments. We use bespoke mathematical techniques (the Fokker-Planck coefficient estimation approach) in order to further investigate our model and to validate it by comparing it, in detail, to the experimental data. The results of our analysis suggest that the locusts decrease the randomness in their motion when they find themselves in alignment with their neighbours, but increase the noisiness when they find themselves out of line. For some reason the locusts panic when not aligned with their neighbours.

One possible explanation for this phenomenon is cannibalism. The best way for locusts to get protein and salt into their diet is to eat other locusts. Experiments have been carried out on Mormon Crickets which suggest that an individual’s sides are vulnerable to cannibalistic attack. Based on our model we therefore hypothesise that, if a locust finds itself out of line with its neighbours, it will increase the randomness of its motion to avoid being eaten. Conversely locusts will reduce the randomness of their motion once in an aligned state so that they might stay in that state for longer. It is also known that cannibalism is a significant force in driving swarms forward. Individuals dare not sit still for too long for danger of being eaten by the locusts behind them!

Our model suggests that, if cannibalism could be reduced, the penalty for a locust who is out of line with his neighbours will also be reduced leading to less stable swarms. Providing alternative, protein- and salt-rich food sources may reduce cannibalism, leading to less cohesion and marching motivation in locust swarms and potentially to their eventual break-up. In addition our model suggests locusts are extremely susceptible to noise and explains why strategies which increase the overall randomness of a swarm (flying aeroplanes low overhead to that their wing-tip vortices disrupt the locusts) are currently being employed in an attempt to disorient and disperse swarms.
References

Wolfson Centre for Mathematical Biology (WCMB) at the University of Oxford, UK